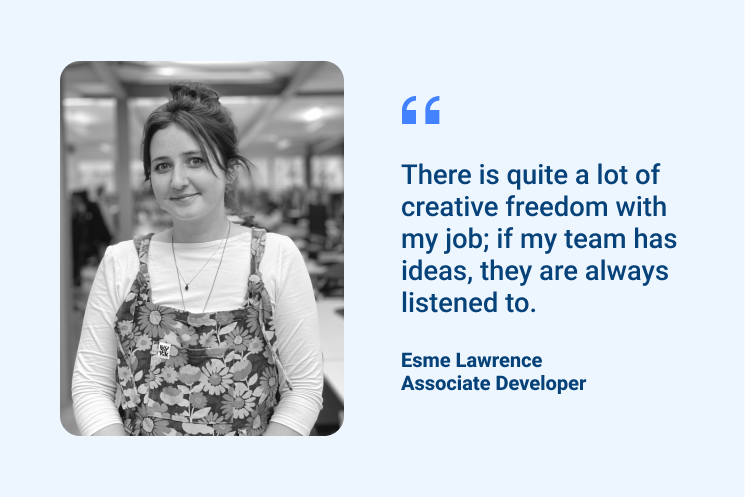 “There is quite a lot of creative freedom with my job; if my team has ideas, they are always listened to”.

Esme Lawrence, Associate Software Developer at Audacia, discusses what brought her to Audacia, how she's been able to progress in her role, and what she enjoys most about her job.

What brought you Audacia?

Before starting at Audacia I studied Mechanical Engineering at the University of Leeds. Whilst I had done quite a bit of coding on that course, this was more related to robotics and, therefore, quite a bit different to what I now do at Audacia.

When I had reached the end of my degree, I was ready for a change. At this time, my interest in environmentally friendly work was also growing and I realised that my ethos didn’t really align with engineering practices.

I started looking at technology grad schemes in West Yorkshire and then I saw Audacia. I really liked the application process because it was very straightforward; you emailed your cover letter and then took part in a phone interview and a face-to-face interview.

Compared to some of the lengthy assessment centres that were required by other companies, Audacia’s recruitment process felt much more informal and to-the-point.

Looking on the company’s social media pages, I could tell that it was quite a social place, which is what I was looking for. I just wanted a generally nice office culture. Previous experiences in industry had felt quite isolating, like everyone was already in a clique and wasn’t interested in social events.

But right from my face-to-face interview I realised that this wasn’t the case with Audacia. Arriving at the office, I could see that everything was open plan which removed the impression that there was some obvious hierarchy. I really liked that.

What were some of the first projects that you've worked on?

After approximately three months of training, I began working with a no-code platform, where I’ve been assigned ever since. While I’ve only worked on this one project, I feel like it’s been quite a unique experience as no-code is a relatively new space in the sector, which means that the priorities are always changing.

It’s all about keeping up with the latest updates and adjustments that are made to the app, which can be challenging but it definitely keeps you on your toes.

I work in a pretty small team at the minute with one project manager, myself, another developer, a front-end developer and one senior tester. However, what’s great is that everyone on my team is very involved with everything. It's not just like, “Okay, this is your job and this is your job”; people help out with stuff and work out issues together, which is really nice.

What opportunities for progression have you had in your role?

I've been quite interested in becoming a project manager and this is something that Audacia has really nurtured where possible. For example, when my manager goes on holiday, I’ve been given the opportunity to cover for her and gain more experience of these duties.

Even though I've not been in the job for very long, it’s great to be trusted enough to be given this managerial position for even a short period of time; that means a lot to me.

What would you say was your favourite part about working at Audacia?

There’s a big social culture at the company, which involves everything from pub visits to board game nights. This isn’t something that necessarily exists at every company, as I’ve learned from talking to friends.

Audacia’s overall approach to work is just really good too, and I really believe that they don’t want us to overwork. I’ve definitely struggled with overworking in the past, particularly, not knowing when to stop with a task. However, here, it’s very much a system here of making sure that people take breaks..

What advice would you give to someone starting a career with Audacia?

My advice to anyone starting at the company would be just to work through any shyness they may feel and get involved as much as possible! For example, I was really keen to improve the way that we recycle rubbish as a company, so I reached out to our operations director with some ideas for improvement.

He was very supportive of the suggestion and now we regularly recycle crisp and biscuit packets. Since then we’ve also started using a food waste bin which goes for compost. These might seem like small wins, but it’s been really nice knowing that the company is willing to listen to the ideas of employees.

Find out more about careers at Audacia