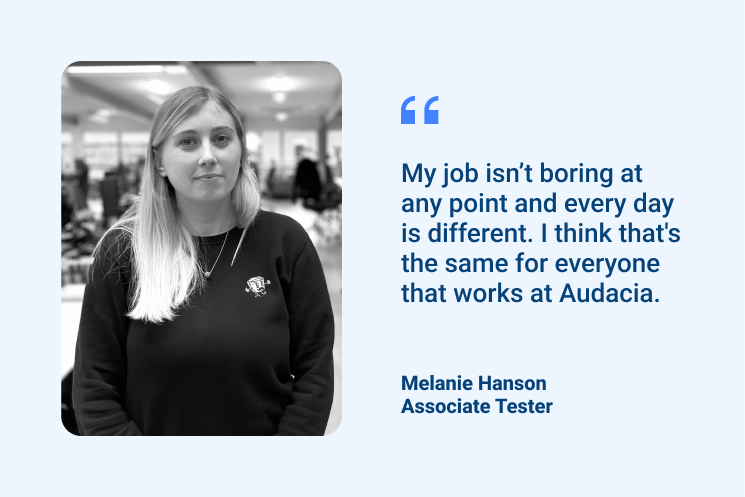 “My job isn’t boring at any point and every day is different. I think that's the same for everyone that works at Audacia”.

In our latest team story, Melanie Hanson shares insights on her work as an Associate Software Tester and the projects she has worked on since starting at Audacia. Having joined Audacia through the Academy programme, Mel has since been involved in several exciting projects, developing her skills as a software tester and gaining invaluable experience along the way.

When did you join Audacia?

I began my career with Audacia through the Academy programme in August 2020. I had graduated a couple of years prior, from the University of Leeds, where I studied chemistry. I had been interested in software development but, later, discovered software testing as potentially more accessible for someone who hadn’t previously worked in Tech.

I have recently been promoted to the associate software tester position, where I continue to test products and interact with clients on a regular basis.

How was the transition to tech from a chemistry degree?

Audacia literally taught me everything from scratch. I think if you had done a totally different degree it would’ve been exactly the same for everyone. Essentially, we were all getting taught the same material, so it wasn't as if doing a science-based degree would’ve put you at an advantage.

They gave us a breakdown of all the modules that we'd be going through one at a time. In the beginning, I was able to do modules in development training, so that I would get those foundation skills and then specialise after that. I was working on this more specialised testing training and others were doing the more in-depth development work, but we all started off with shared modules.

Could you give some insight into what a tester does?

There's a lot of different things, but I suppose the main thing is just actually testing that something that a developer has worked on works as it should. And, obviously, there are a few different aspects to that: whether it works within a certain environment; whether it performs well; if the page is loading correctly; whether it's secure.

There is also specialised testing that can be covered, like performance testing or security testing, but, day-to-day, it's mainly writing and executing tests, and reporting any failures back to the development team. There's some extra things that can be done around automated testing, that we can then run at the end of a sprint to double check that nothing that was already on the website has been unintentionally changed by the things that we've been working with.

What were some of the other projects that you've moved on since the academy?

The first project that I worked on after the academy was with a no-code platform. Although this had the potential to be daunting, I think I felt quite prepared at the time because, for the actual test training, I got to work with another experienced tester. I worked on this project with a Senior QA who helped me with my role during this transitional period. Having this hands-on experience was very beneficial as you weren’t just moving off into a totally new project when you have no experience of it.

Today I'm working on a project with a global manufacturer; this is one that I've probably been on the longest and definitely the biggest project I’ve worked on. I find it rewarding that as you become more experienced in your role, you gain more responsibility and ownership over these big pieces of work.

What advice would you have for someone who might be joining the Academy?

Try and learn everything that you can! When I started I wasn’t necessarily going to be doing coding training with the developers, but I was given the opportunity to enrol on this module and it's helped so much in the long run. Learning these skills has helped when I was then doing the automated testing training, looking at SQL and how to query a database; I now use it every single day. So I think just really trying to say “yes” to everything you can. Being curious early on is guaranteed to give you confidence and help you learn more.

Find out more about careers at Audacia