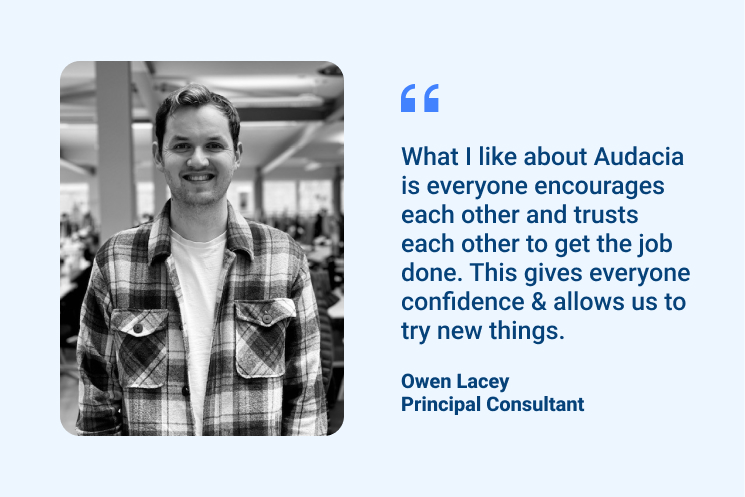 “What I like about Audacia is that everyone encourages each other and trusts each other to get the job done. This gives everyone confidence and allows us to try new things.”

Principal Consultant, Owen Lacey, tells about his role, the types of projects he’s worked on and what prospective developers can expect working here at Audacia.

After graduating from University with a degree in Maths, I got a job as a developer at a healthcare technology company, before moving to Audacia in 2016. At that time, I was looking for a company who had a culture that was more in line with what I wanted; a friendly environment, where people made time for you and trusted you.

I joined Audacia as a developer with one year of Java experience. I started at a graduate to-upper-graduate level, but with no .NET experience. However, I was able to learn on the job, being trained internally from when I started.

What opportunities for progression have you had at Audacia?

Over the last 5 years I’ve worked on a handful of projects, working with companies across the manufacturing, healthcare and utilities industries. I was promoted to senior developer about 2 years ago and principal consultant in the last couple of months.

This is one of the two avenues that you can go down as a software engineer, either as a principal consultant or principal engineer. You’re able to steer that development and pursue which of these areas you’re interested in. I chose my route as I was interested in client interaction from a sales perspective as well as onboarding clients moving forward.

Audacia has been very supportive of my extra curricular progression as well. With their support, I’ve gained a MCSE qualification and have recently enrolled on some online machine learning courses. All of this works toward my progression and has given me the confidence to try out new things to build my skill set.

What projects have you worked on?

My first project was with a global manufacturer of mechanical seals, which I worked on for about 18 months. I was in a team of four developers and, at the time, was probably the most junior developer on that project. That was a great project because there was a lot of trust from the client, which I enjoyed.

In terms of my favourite projects, the one that I am working on currently is probably my favourite. We’re working with a prominent provider of infection-prevention goods & services and we’re using Google OR-Tools to optimise the way in which we schedule products that are receiving radiation.

As a company, we’ve invested some time in doing some research and development around Google OR-Tools. It’s very innovative and aligned with the sort of curiosity that we have at Audacia.

What can people expect when starting a career at Audacia?

Trust. I feel very trusted and how often I’m ‘checked in on’ is quite dependent on me. That’s probably one of the best parts about the role. So long as something is delivered on time, there’s room for flexibility and innovation which is great because it allows you to use your initiative.

The new technologies and the projects are really interesting too. Now we’re in quite a nice position where yes we’re still competing for tenders and new contracts, but we have the freedom to choose projects that excite us and that we really want to work on.

If you’re a developer at Audacia, you’re an Audacia developer as well. A lot of companies outsource their development, but I like that we don’t do that because it gives you a real sense of the company you work for and their culture.

Audacia is a leading software development company based in the UK, with headquarters in Leeds. Find out more about what it's like to work here and our current open vacancies on our careers site.